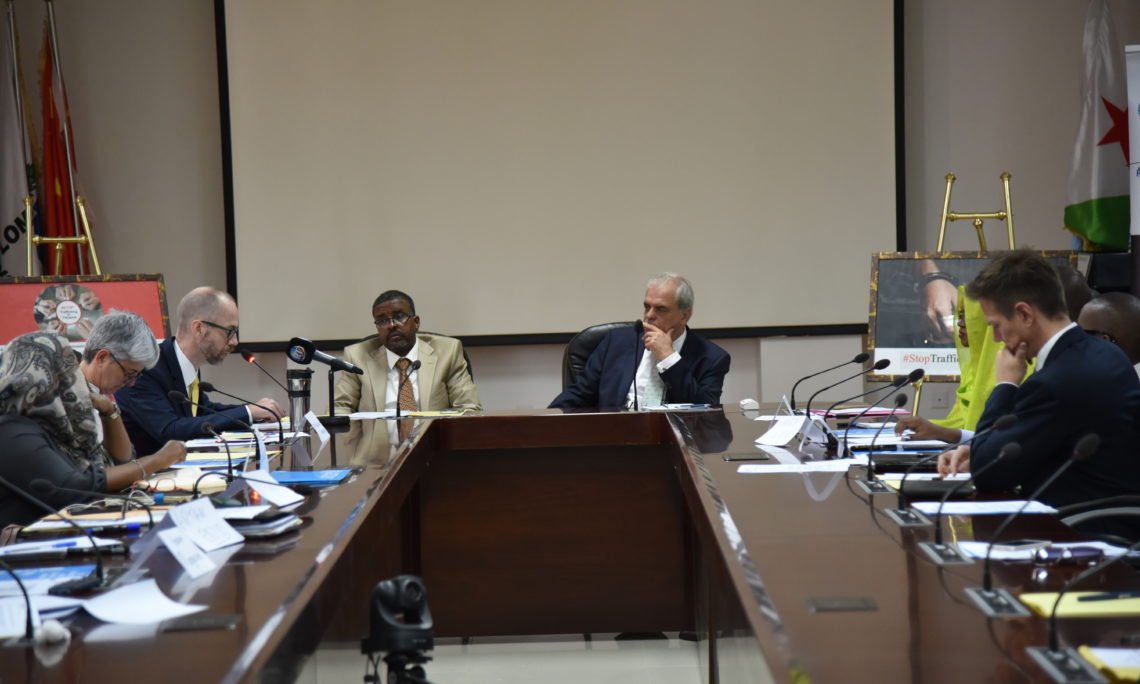 Recognizing the «World Day Against Trafficking»

The U.S. Embassy on July 30 participated in the Ministry of Justice-led World Day against Trafficking event at the Diplomatic Institute.

In his World Day against Trafficking speech, Charge D’Affaires Alex Hamilton said, “every country is impacted by trafficking, including the United States.  The U.S. Department of State Trafficking in Persons Report this year had estimated 20 million trafficking victims globally. We all have a role to play in addressing this global problem.”

In citing the support provided to the government of Djibouti, he said, “the U.S. government provided a $500,000 grant to UNODC” to work on building capacity to identify and prosecute trafficking crimes.

In addition, he mentioned, “as you know, this work is not about us.  This is about assisting those who are the most vulnerable.  We are working together to help that young girl who is too afraid to go to the police or gendarmerie to report her abuse.  We are working to protect the childhood of an unaccompanied migrant child forced to beg on the street.”

Acknowledging Djibouti’s progress against trafficking, he commented:  “All your efforts over the past year came to fruition in this year’s trafficking in persons report.   Out of 187 countries assessed from the trafficking in persons report, 36 countries were placed on Tier One, 80 on Tier Two, 45 were placed on the Tier Two Watch List, and 23 countries were on Tier Three.  In all, there were 21 downgrades and 27 upgrades.  Djibouti was one of a handful of countries to be upgraded to Tier Two watch list after being downgraded the previous year. “

Concluding his speech, he said, “each one of you has the ability to make a difference.  Thank you for taking the time to recognize this important struggle.”

For further information regarding U.S. Embassy efforts to address trafficking in Djibouti, call 21453112 or email grullonHR@state.gov