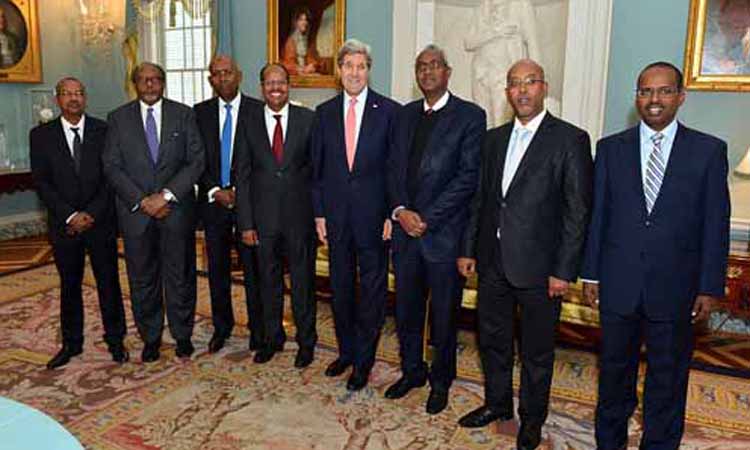 On February 25 and 26, in Washington, DC, senior officials of the United States and the Republic of Djibouti Governments met to launch the inaugural U.S.-Djibouti Binational Forum, a key outcome of the historic May 5, 2014, White House meeting between U.S. President Obama and Djiboutian President Guelleh. Deputy Secretary Blinken welcomed the Djiboutian delegation and opened the Binational Forum. The senior-level delegations addressed a range of important issues including security cooperation, economic development, energy exploration, and education.

The ministerial-level meetings, led by Secretary of State John Kerry and Minister of Foreign Affairs and International Cooperation, H.E. Mahamoud Ali Youssouf, indicate the strong commitment by both nations to continue a strategic dialogue on key priorities. The two countries work closely on countering violent extremism and terrorism in the East Africa region. The Republic of Djibouti hosts the only enduring U.S. military presence in Africa at Camp Lemonnier near Djibouti City. The delegations announced a new state partnership between the U.S. National Guard and the Djiboutian Armed Forces. Under the program, the Kentucky National Guard will partner with the Djiboutian Armed Forces to strengthen cooperation between the two militaries. The official launch of the program will take place in Djibouti later this year. In his first bilateral meeting at the Pentagon as Secretary of Defense, Secretary Ash Carter lauded Djibouti’s decision to deploy additional forces to Somalia, emphasizing the importance of continued bilateral and regional cooperation in operations to defeat al-Shabaab.

To strengthen economic partnership, the delegations pledged to work together to implement recent legislation – “Djibouti First” – that seeks to give preference to Djiboutian companies to win goods and services contracts at Camp Lemonnier. The Forum concluded with the two sides agreeing to regular meetings throughout the coming year to prepare for the second Binational Forum in 2016, which will be hosted by the Government of Djibouti in Djibouti. USAID Assistant to the Administrator Eric Postel chaired an economic roundtable, where the Djiboutian delegation and U.S. Government agencies highlighted areas of focus for economic development in Djibouti, such as energy development, education, and workforce development.