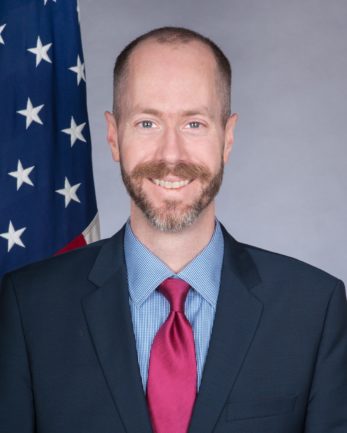 J. Alexander Hamilton arrived as Deputy Chief of Mission of U.S. Embassy Djibouti in May 2017.

In his last overseas assignment, Mr. Hamilton served as the chief of the Political and Economic Section at the U.S. embassy in Vilnius, Lithuania. Prior to Vilnius, Alex was a desk officer for the Organization for Security and Cooperation in Europe in the Bureau of European Affairs. Alex has served as a consular officer in Tashkent, Uzbekistan, political/economic officer in Vladivostok, Russia, and public diplomacy officer in Beijing and Shenyang, China.

Alex is a graduate of Georgetown University and the Naval War College in Newport, RI. He joined the Foreign Service in 1998 and speaks French, Russian, Lithuanian, and German.