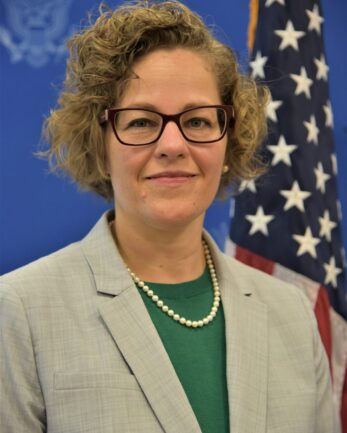 Andrea J. Tomaszewicz assumed responsibilities as Deputy Chief of Mission at the U.S. Embassy in Djibouti in July 2020. She served most recently as the Chief of Political and Economic Affairs at Embassy Mogadishu – part of the first cohort of officers to formally reopen the embassy and base permanently in Somalia since the early 1990s.

Focusing her career on African affairs, Ms. Tomaszewicz has also had postings in Zambia, Chad, and as Special Assistant to the Assistant Secretary of African Affairs. A Foreign Service economic officer, she honed her skills further serving in Kosovo, Trinidad and Tobago, and Sri Lanka, and via Washington-based assignments such as Senior Watch Officer in the Operations Center and in the Office of Iraq Affairs.

Her desire to both focus on public service and work internationally developed during her years as a Peace Corps Volunteer teaching English as a Foreign Language in rural Estonia.  Ms. Tomaszewicz earned an M.A. in Environmental Policy from The George Washington University and a B.S. in Physics and Philosophy from Rensselaer Polytechnic Institute.  Prior to joining the Foreign Service, she worked on environmental policy development with a U.S.-based non-governmental organization and the Department of Defense.
She and her Foreign Service Officer spouse, James Ikner, along with their dog, love adventure, travel, and trying new foods. She speaks French and Estonian.