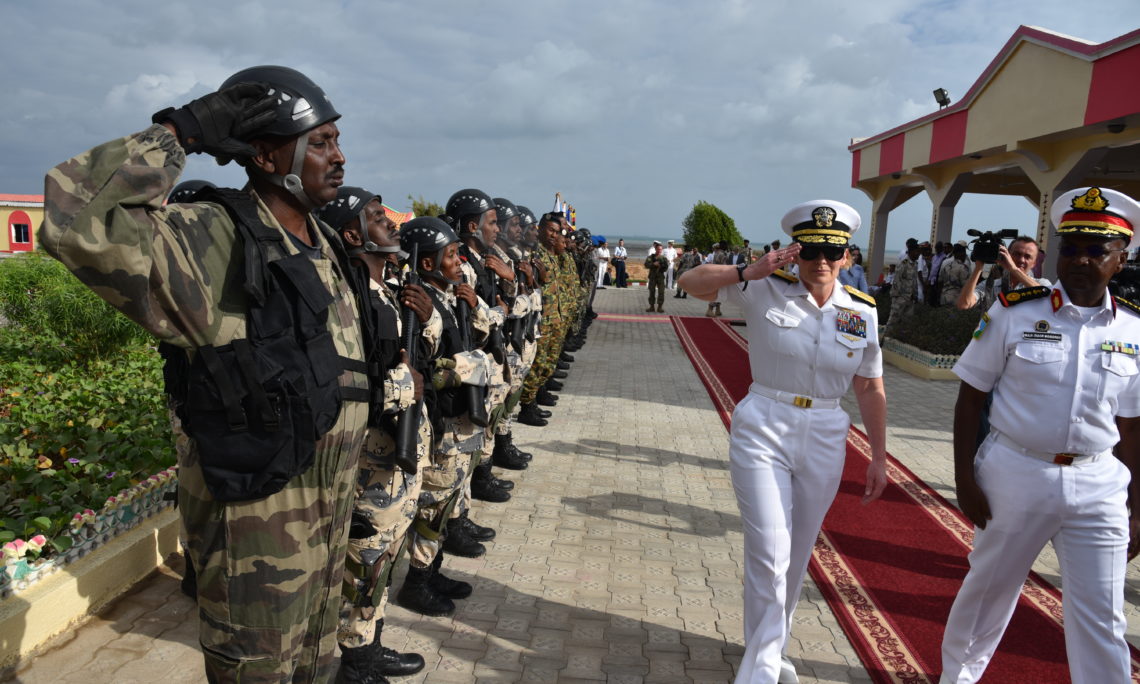 It is my honor to address you today at the opening of CUTLASS EXPRESS 2019. Djibouti has been a leader in this event since 2012. I would like to first thank the Minister of Defense, the Minister of Equipment and Transportation, the Director of Ports, the Commandant of the Coast Guard, the Chief of Forces Armees Djiboutian, and the Chief of the Navy.

The United States of America recognizes the importance of a stable and secure East Africa.  Safety and stability for all of the countries involved in CUTLASS EXPRESS is largely dependent on a secure environment along the coast and in the surrounding seas of this region.  A number of factors, including terrorist organizations, piracy groups, and illegal fishing threaten the region’s security and economic well-being.  As East African nations strive toward levels of further development and a better life for their people, these threats have the potential to limit the success of international efforts to improve the situation in this area.

CUTLASS EXPRESS will practice collecting information about what is happening offshore, analyzing the data, and passing that information to National Maritime Operations Centers. Once one of these Operation Centers has directed a response, a team will intercept the targeted vessel, and teams will board and investigate for illicit activity.  Countries will practice sharing information of mutual importance and working together as a Maritime Task Force in multinational interdiction coordination. All of the scenarios are based on the threats each of these countries face off the East Coast of Africa.

Djibouti’s graciousness and hospitality in hosting all of their partner nations represented here today shows that this country is proactively making regionally cooperative maritime security a priority.  As an observer of the Djibouti Navy and Coast Guard’s efforts over the past year, I have been very impressed by their progress. Both the Ministry of Defense and the Ministry of Transport understand the value of safe and secure waters here inside the Gulf of Tadjoura, in the Gulf of Aden, up through the Bab all-Mandab to the Red Sea, and down the west coast of the Indian Ocean.

Maritime security cannot be conducted alone in a vacuum. The seas are vast, and covering this expanse requires partnership amongst all stakeholders to protect and secure these vital lifelines. The countries participating in this exercise in all capacities, as facilitators, players, and observers; demonstrate their awareness of this requirement and have answered the call to action.

After all the advancements of technology, the most important asset to any military force remains unchanged.  This is, of course, the people.  So even as all teams in these next two weeks refine their skills, I believe that the relationships built here among partners will be one of the most important legacies of CUTLASS EXPRESS 2019. I am confident that all participants were all well-chosen as representatives for their country, and I look forward to hearing about their great accomplishments during these next two weeks. In that vein, I am also confident that these great accomplishments will not end here in Djibouti, and will continue as these sailors and coastguardsmen return home.

I thank everyone for their attendance this morning and look forward to continuing the strong maritime partnerships we have across the globe and in East Africa particularly. It is only with your assistance and participation that we can look forward to another excellent year of CUTLASS EXPRESS. Thank you.