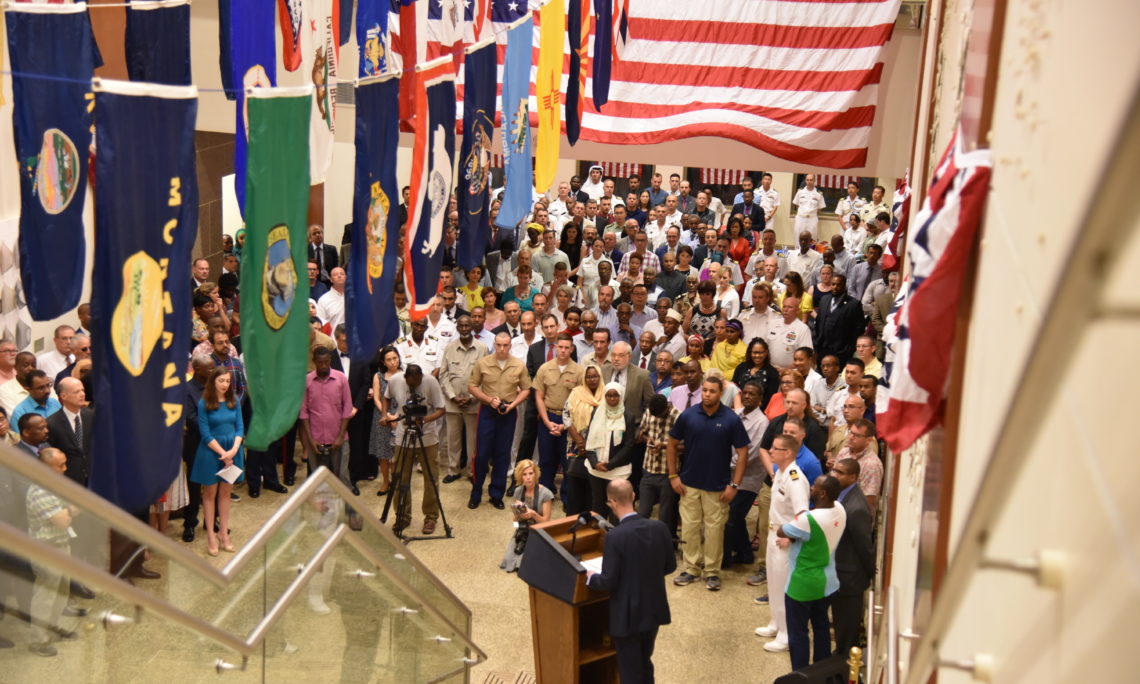 Welcome to US Embassy Djibouti!

It is an honor and a privilege to be your host as Chargé d’affaires and acting Chief of Mission as we celebrate the 241st anniversary of the independence of the United States of America.  I consider myself extremely fortunate to be with you all tonight, on the eve of the 4th of the July.  As many of you already know, my family and I arrived only recently, after many months of preparation for this assignment.  We are very happy – and very grateful – to be here in Djibouti.

As our mission celebrates our National Day, we are also celebrating the bilateral relationship between the United States and Djibouti.  Ours is an important and enduring relationship, forged in mutual interest and pursued under the ideal that together, we can take on daunting challenges and accomplish a common mission.  From combatting piracy in the Gulf of Aden and defeating the scourge of terrorists like Al-Shabaab in Somalia, to providing refuge and nourishment to refugees fleeing less stable parts of the region, Americans and Djiboutians work together every day to advance the national security of both of our nations.

On June 27, I had the privilege to observe a tremendous demonstration of Djiboutian civilian and military capabilities during the National Day parade, celebrating 40 years of Djiboutian independence.  This is a significant milestone, and the progress that Djibouti has made since gaining its independence in 1977 speaks volumes about the great things yet to come.

I am also greatly impressed every time I visit Camp Lemonnier, to meet with the leaders of CLDJ and Combined Joint Task Force Horn of Africa and learn more about the great partnerships that we are building across the region.

I cannot express how proud I am to serve with you, and all the men and women, Americans and Djiboutians, who work to advance the relations between Djibouti and the United States, and to further our national security.  It is with great respect and humility that I join your ranks.

As we are here tonight to celebrate our country’s independence, like all countries we are ever evolving and working to make ourselves better – to form a more perfect union, as Lincoln said.  And for those of us who are lucky enough to represent the United States overseas this could not be more important as we strive daily to put America’s best face forward.

Thank you for celebrating our country’s Independence Day with us here tonight.  I hope you all have a wonderful evening.