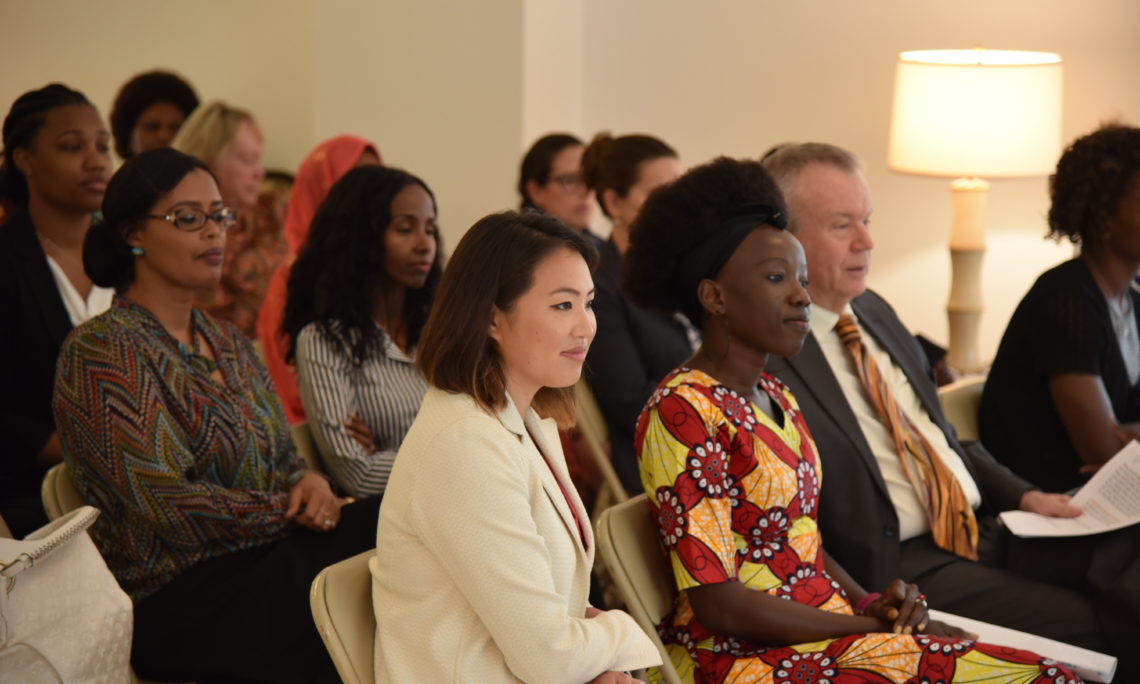 My wife, Ouroukou, and I welcome you to our home to celebrate International Women’s History Month.  We have among us here today leaders whose achievements have made history in their fields; women who have positively influenced many lives; women whose positive impact crosses borders, ethnicities, and generations.  Their examples encourage the dialogue necessary to advance gender equality in all human societies.  I extend my sincere gratitude to the leaders who sit before you.  I appreciate the stories, insights, and experiences that all of you will share.  And I thank all of you in this room for joining us today.

Countries around the world have celebrated International Women’s Day and Month for over a century.  While gender equality has improved globally in several aspects over the last 100 years, we still have a long way to go to achieve gender parity.  This year’s International Women’s Month theme is “Press for Progress.”  We must press for progress in achieving gender equality.  We must also oppose, vigorously, acts perpetrated against women because of their gender, acts ranging from extreme disrespect to criminal assault.  We in the United States government, both civilian and military, are intensively reviewing our own practices and standards to ensure that effective procedures are in place, and are used, to prevent such acts, and, when and if such acts occur, to encourage reporting followed by disciplinary action or criminal prosecution as warranted.  Respect for one another is a fundamental value.  Each of us has a responsibility to enforce that value.

This year’s theme also puts the spotlight on action and change.  This year, Djibouti passed a law that requires a 25 percent representation of women in the National Assembly.  I applaud the government for affirming its commitment to gender equality.  We at the United States Mission to the Republic of Djibouti are proud to be partners with a country that leads with action.

Today, and all days, we honor the significant sacrifices that women have made, the challenges that they have faced, and the battles they have won to gain access to the same inherent rights that have been traditionally limited to men.  We pay tribute to the women who have expanded the boundaries of business, science, health, education, law, policy, medicine, economy, defense, journalism, and so many other fields.  We all benefit from their efforts.
A bird with one strong wing and one weak wing cannot fly straight and high.  For humanity to proper, women and men must have equal opportunities to thrive, to contribute, and to lead.
Thank you. Merci beaucoup. Shukran, mahadsanid, gadda ge.