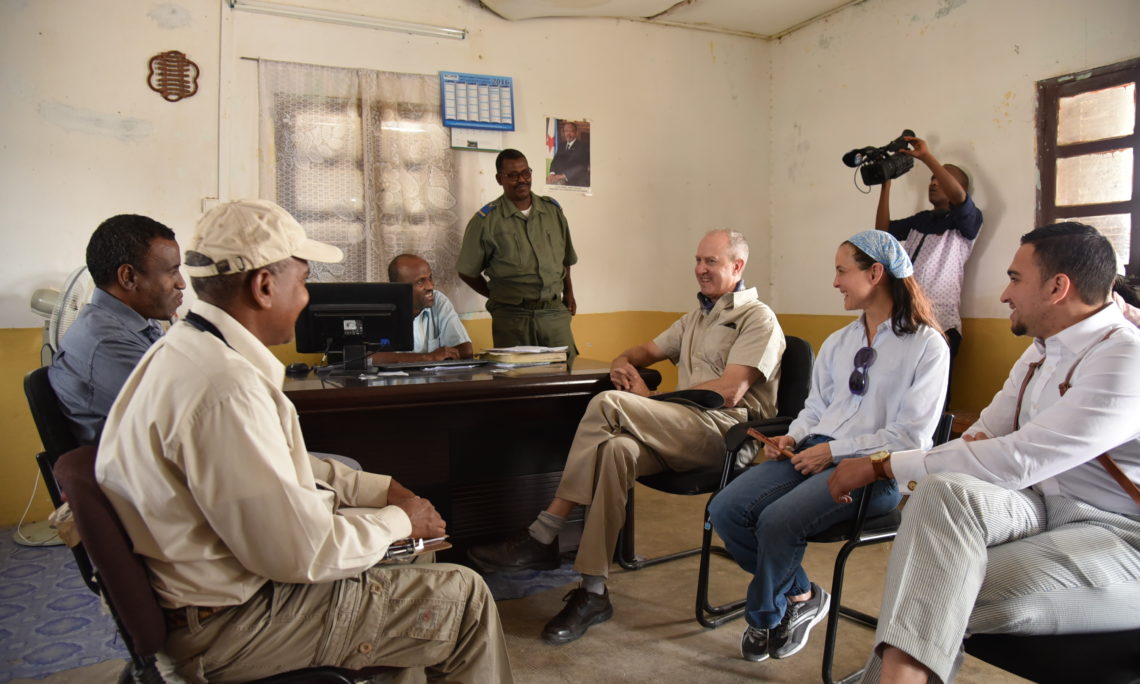 On June 20, Ambassador Tom Kelly, along with ONARS Director Houssein Hassan Darar and UNHCR Representative, Paul Ndaitouroum, visited Ali Addeh Refugee Camp to dedicate a new lighting project, and to deliver clothing items to refugees and the local community on behalf of U.S. Embassy employees and families and from Americans living and working at the U.S. military’s Camp Lemonnier.

The Ambassador commended Djibouti on its commitment to relieve the suffering of people fleeing violence, especially in Yemen and Somalia, adding that the world often fails to recognize the herculean response of countries like Djibouti to these pressing global crises. Kelly said that Djibouti has hosted hundreds of thousands of displaced people over more than 20 years and Djiboutians continue to do so with an extraordinary spirit of generosity.

“By installing six solar street lights throughout the Camp, we hope this project will improve access to hygiene facilities, increase commercial and learning activities, and reduce the risk of violence against women.” The Ambassador explained that last year, the U.S. government gave more than $6 billion to assist refugees worldwide and that private Americans donated more time and money to augment that assistance.

In Djibouti, last year, the U.S. government provided UNHCR with $4.6 million to support refugees, including $2.6 million (14 million Djiboutian francs) to respond to refugee needs caused by the crisis in Yemen.  In addition, the United States assisted with education and training in job skills for refugees and the peoples in surrounding communities, so that all can become self-sufficient and provide for their families.

The Ambassador thanked partner organizations such as UNHCR and the International Organization for Migration, and the World Food Program, for their work with refugee communities. The United States continues to be the largest single donor to refugee communities in the world.

Created in 2000, the Julia Taft Refugee fund is open to registered NGOs that provide services to refugee communities living at camps in Ali Addeh, Holl Holl, or Markazi as well as urban refugees living in Djibouti City.